Huon Aquaculture Group (Huon) Managing Director and CEO Peter Bender took the decision today to write to the Commonwealth Minister for Sustainability, Environment, Water, Population and Communities, requesting direct intervention by the Federal Government in Macquarie Harbour following the receipt of the Tasmanian EPA Director’s draft determination in relation to biomass in the Harbour for the Summer of 2016/17.

“Given the deteriorating environmental conditions in Macquarie Harbour, and prolonged absence of appropriate action by both the Tasmanian Department of Primary Industries, Parks, Water and Environment (DPIPWE) and the Tasmanian Environment Protection Authority (EPA), we felt compelled to request that the Federal Minister take urgent enforcement action against DPIPWE,” said Mr Bender.

“We have formed a view, supported by a range of independent scientific evidence, that the cumulative impact of aquaculture operations in Macquarie Harbour is breaching the conditions imposed by the Minister’s determination,” he said.

“The EPA Director’s draft determination fails to respond to the scientific evidence which indicates a need for urgent and immediate action and this is why we have asked for Federal Government intervention.

“Our view is that today’s draft biomass determination further demonstrates that DPIPWE and the EPA are failing to properly regulate marine farming in Macquarie Harbour and will cause ongoing deterioration of environmental conditions in the harbour.

The letter to the Federal Minister has also referenced the Company’s inability to fulfil the conditions of the Minister’s determination of 2012 that allowed the expansion of the industry subject to a range of conditions.

“The scientific briefing that the EPA and all industry participants received several weeks ago was based on data up until the end of September and at a standing biomass of around 11,000 tonnes. Directly following that briefing, the EPA Director announced that he was sufficiently concerned that action needed to be taken and that four leases across the Harbour were non-compliant.

“That same scientific briefing indicated that the standing biomass of around 11,000 tonnes was well in excess of what Macquarie Harbour can sustain given the degraded environmental conditions.

“How is it that the EPA Director can make a draft determination that the harbour can safely sustain an increased biomass of 14,000 tonnes?

“Something doesn’t add up and I invite the EPA Director to provide our Company and the people of Tasmania the information on which he has based the draft determination.

“In our view, the draft determination will; achieve nothing and in effect preserves the status quo in the Harbour in terms of biomass; is at odds with independent research and findings; and will further exacerbate the extremely low dissolved oxygen levels, and deteriorated sediment conditions around farming leases as well as in the World Heritage Area within Macquarie Harbour.

“Huon’s Board and management have taken the strong step to request the intervention of the Federal Environment Minister to protect the long-term reputation of the industry and secure the jobs of those that work in it.

“If we fail to act now, we are placing the long-term security of our employees and industry at risk.

“Our actions speak to our ethos that we will not operate in a boom and bust cycle by placing too much pressure on the environments we operate in and expose ourselves to long-term reputational damage and jeopardises the job-security of our employees.

“We believe that Macquarie Harbour can be farmed safely for the long-term but to do that we need to act now, act responsibly and act in the long-term interests of our employees,” concluded Mr Bender.

The Company will commence harvest of its Macquarie Harbour fish three months earlier than planned as part of the Company’s commitment to take whatever action is necessary to improve environmental conditions in Macquarie Harbour so that it can continue to farm the area in a safe and sustainable way.

Huon Aquaculture Company (Huon) cautiously welcomed the announcement by the Environment Protection Authority (EPA) today that the regulator was implementing a process to manage salmon farming in Macquarie Harbour to ensure its long-term sustainability. “We have long been on the… 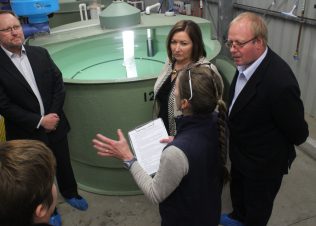 Huon Aquaculture Co-founder, Frances Bender today welcomed the official opening of a new Experimental Aquaculture Facility (EAF) in the south of Tasmania and the first of its kind in the Southern Hemisphere. The EAF will enable research on larger fish…