Salmon is a rich source of protein, vitamins, minerals and essential fatty acids such as Omega-3 oils – the building blocks of life.

There are two groups of Omega-3 oils commonly referred to: one is sourced from plants, the other oily seafood.

The marine sourced Omega-3 oils – long chain fatty acids (LC n-3) such as EPA, DPA and DHA are considered to be the most beneficial.*

Every cell in your body uses long chain fatty acids. Sixty per cent of the brain is made from structural fat, primarily DHA – one of two Omega-3 oils found in Huon Salmon.

CSIRO studies have shown that salmon contains between 10 and 100 times as much Omega-3 as beef, chicken, lamb and most other kinds of seafood.** A look at all of the other macronutrients, vitamins and minerals found in salmon compared to other foods confirms its place as a superfood. 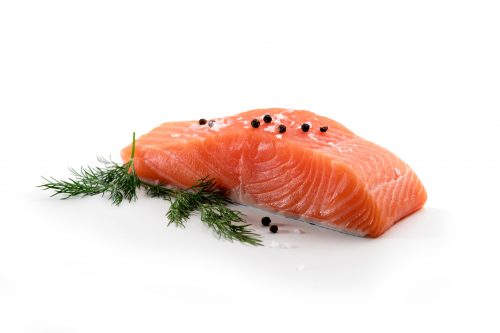 Omega-3 and reduced risk of cancer

According to Goethe University, Frankfurt, diets in countries with low rates of colon cancer have high rates of omega-3 polyunsturated fatty acids, which are thought to have a protective effect. (1)

NutrIngredients.com reports that new studies link fish-derived Omega-3 fatty acids with a potential mechanism for weight reduction by activating genes that break down fat. Appeared to stop the animals from gaining weight when given free access to food. Additionally, the Omega-3 concentrate reduced the number of fat cells, especially in the abdomen region. (3)

Dr Madeline Portwood, an educational psychologist in Durham ran a trial on the effects of fatty acids on children aged between 6 months and 21/2 years. “We saw a transformation” she reported. “Babies and young children who receive daily does of fatty acids were better able to express themselves, understand others, and bond with their parents.” (4)

Professor Crawford, Dublin, Ireland: “It’s simple: our brain is made of marine fats. If we do not feed it the food it requires to remain healthy — fish and specifically omega 3 fats — then we are looking at serious brain problems like depression, bipolar disorder and childhood behavioural problems like ADHD, dyslexia and dyspraxia.” He also cautioned against relying on Omega-3 supplements or Omega-3 enhanced food products. “Supplements are OK as an emergency measure,” he said, “but the best source of Omega-3 fatty acids is to be found in natural products and seafood is by far the main source.” (2)