Industry leading technology - the only fish farm pen for the future. 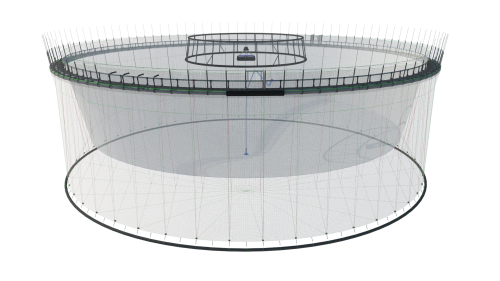 Over the past few years Huon has invested more than $100M in our Fortress Pens, which are in use in Storm Bay; some of the roughest farming conditions in the world. This high energy site, frequently receives storms swells and gale force winds and the pens continue to withstand the elements. Our Fortress Pens contain no steel parts to damage boats or chaff through nets and ropes. We also use light-weight, super-strong nets on the pens (made from the same material as bullet-proof vests) which can withstand extremely high current flow.

When introduced, Huon’s Fortress Pens were a world first; a fully enclosed walkway, nets made out of the same material used to make bullet proof vests, a two-net design to keep seals away from the fish, and fish away from the seals.

The design included elements of windsurfer technology to withstand the buffeting Tasmanian winds as well as accommodate cutting edge, in-situ net cleaning technology for the first time in Australia.

The Fortress Pen System was developed in Tasmania by our team at Huon Aquaculture in response to a need to keep seals out, provide a safe platform for our staff to work on and allow us to farm further offshore. There was nothing available on the market, so we underwent a 2-year, new pen development project with funding support from the Australian Government’s Fisheries Research and Development Corporation.

The project began in 2012, with the first prototype pens in the water during 2013. One of the key features of these pens was a widestyle stanchion with flexible seal fence posts in an angled socket to allow an outer predator net to be set around the inner net while keeping a distance of  between 2m and 7m separation between the nets. This outer predator net was connected directly to the sinker tube to reduce rigging and keep it tensioned at all times and in all weather.

We then developed a unique tensioning system for the inner net that allowed it to flex with the pen, the predator net and the sinker tube. The end result is a pen that is easy for our staff to work on, keeps seals and other marine predators out and allows us to focus on the performance of our fish.

Designed and tested for the toughest conditions in the world

Huon’s Fortress Pens have been designed for, and now tested in, some of the toughest Australian conditions at Storm Bay, Tasmania and Providence Bay, New South Wales, which has led to continual improvements to the design. These sites are high energy, exposed sites, frequently receiving storms swells and gale force winds.

Modelling by Aquastructures AS, Norway show the Fortress Pens are capable of withstanding these tough conditions and Farming these pens at these locations over the last few years have shown them to be able to withstand storm events.

Outer predator net above water keeps staff safe from menacing seals and from being washed off the collars.

Stanchions made from impact modified Nylon provide the strength of steel, but with durability and flexibility.

Huon’s Fortress Pens contain no steel parts to damage boats or chaff through nets and ropes.

Outer seal-fence poles and predator-proof netting to keep seals off the pen above-water.

Underwater the predator net provides an impenetrable barrier that keeps seals and sharks away from the fish.

Keeping seals, sharks and birds away from the fish allows them to grow without disturbance.

Nets are optimised for use with mort collectors, so any dead fish can be retrieved as required.