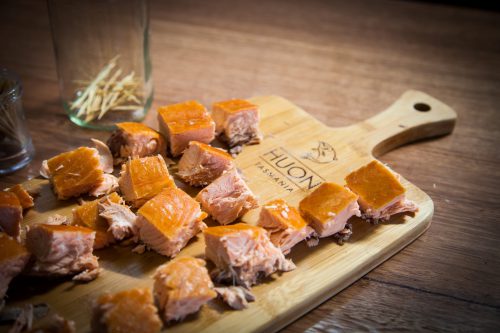 Our Huon Salmon and Ocean Trout is 100% grown in Tasmania.

Since the first harvest of farmed Atlantic salmon in 1986, the aquaculture industry has grown to become the leading farming activity in Tasmania.

Atlantic salmon, salmo salar, is one of several varieties of salmonidae and it is important to note that other species have adopted the characteristics of Atlantic salmon but do not have the qualities and flavour we have come to love today.

Atlantic salmon was first introduced to Tasmania and New South Wales for sport fishing in the 1800s but a population was never established. The next attempt to introduce the species to Tasmania was not until the 1980s when fertilised Atlantic salmon eggs were purchased from the Gaden Hatchery in Jindabyne, New South Wales which originated from Nova Scotia, Canada in the 1960s.

In 1985, it was determined that the health of the new stock was at a standard they could introduce to the sea, with 36,000 fish included in the first transfer.

Huon Aquaculture began farming not long after in 1987 and has grown to become Australia’s signature producer of Atlantic salmon with approximately 550 employees. The rigorous testing which occurred in the 1980s and Huon’s continued dedication to biosecurity and environmental standards has ensured that we produce the world’s most loved salmon.